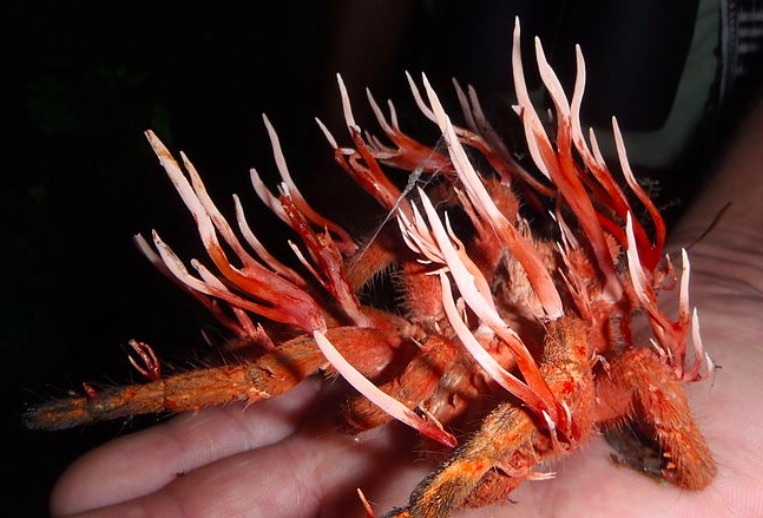 One of the most popular posts on my site is the one about how cordyceps helped boost my libido and turn me into a sexual dynamo.

This post here serves as a continuation to the original post that you can read by clicking here.

I left a couple of key questions unanswered that guys have been asking me since I first published the cordyceps post a couple of years back now.

I’ve been asked, “What’s the best time to take cordyceps?”

“What is the best dosage for men who are looking for a libido boost?”

Well, I will answer those two questions and more below.

If you want to jump straight to the answers, use the links in the table of contents below.

If you don’t know what cordyceps is exactly, allow me to introduce you to this parasitic magical fungus that makes bedrooms a few degrees warmer around the world.

I’ve been taking cordyceps for over five years now.

However, like all supplements, it won’t work for everyone.

Double however, most guys I’ve spoken to have had great results with it when they follow my guide.

Cordyceps is a parasitic fungus that slowly kills insects by entering their bodies and taking control of their movements.

It is often referred to as the “Zombie Fungus” because of the way it takes over its host.

There was thought that the particular parasitic fungus that kills carpenter ants, Ophiocordyceps unilateralis sensu lato, enters and controls their brains.

New research conducted by Penn State University and Notre Dame found that cordyceps fungus does not enter the brain.

Instead, the fungus infects the entire body of the insect by controlling its muscles.

It’s Invasion of the Body Snatchers in insect land.

Once the infected insect dies a slow, ugly death, the cordyceps begin to grow mycelium inside the carcass.

Here’s how amazing this stuff truly is.

Once it takes over the ant’s body, it leads the ant to the highest possible spot before it forces the ant to clamp down in its future grave.

This way, once the mushrooms grow from the carcass and release spores, they cover the largest possible area.

Cordyceps is perhaps the most cold-blooded killer on planet Earth.

Most types of friendly fungus grow off cow poo, wood, or grains.

Could cordyceps spread to humans?

Where does Cordyceps grow?

There are hundreds of species of cordyceps that all love to kill different insects.

Zombie caterpillars are commonplace in Asia.

Cordyceps is found in nature throughout Asian countries, most notably in Tibet.

Like most fungi, it grows well in a moist, warm environment.

Mushrooms consist almost entirely of water, up to 90%.

Unfortunately, wild cordyceps are difficult and expensive to obtain.

The fruiting bodies are small, and it’s hard to find in the first place.

For these two reasons, people have begun growing it in labs.

Almost all the cordyceps supplements available in the U.S. are grown in labs.

While I do wish that I could get my hands on some wild Tibetan Cordyceps, I’ve found that the lab-grown cordyceps certainly does the trick.

That’s enough science for one day.

Let’s get to the part where I tell you how and when to take it.

Best Time to Take Cordyceps for a Libido Boost

I know this is the part you’re after, and for good reason.

It’s important to take cordyceps at the right time, or you won’t get the most out of it.

There are several different situations in which you may want to take it to boost your performance.

It not only boosts performance in the bedroom; it also boosts athletic performance.

One study found that the testosterone/cortisol ratio decreased by 30% in seven male cyclists who supplemented with the mushroom.

I know when I take it, I breathe deeper without extra effort, and it slightly increases my heart rate – not enough to cause me anxiety.

Getting back to the point, I like to take it at least a couple of hours before I want to feel the effects.

Just yesterday, I took a few capsules before meeting my girl, and we later enjoyed three long rounds.

The key is to take it at least a few hours before exercise or meeting your date to get the whole effect. The best part is the effects last a long time, and I have no problem sleeping that night, hence the reason it’s better to take it earlier in the day.

Also, I don’t take it with food.

I prefer to take it on an empty stomach after breakfast with some green tea.

I find that taking it with green tea enhances the effects.

Sometimes I’ll feel the effects continue into the next day.

Another thing I love about cordyceps is there’s no crash or come down.

That’s big for me because if I take something that makes me feel too speedy, I can crash for days afterward and get depressed.

In the end, that one hyper day adds up to less output than three days of green tea and steady work.

Addies and coffee are a recipe for disaster in my world.

I’ve been on a tear ever since I discovered the amazing varieties of green tea Asia has to offer.

I had been drinking bunk green tea that I thought was good for many years.

Green tea in America is junk.

The varieties of tea I drink these days give me unrelenting energy throughout the day and don’t affect my sleep at night.

But before I go too far off the rails, be sure not to take cordyceps too close to when you’d like to feel the effects.

I’d like to start out by saying that once you encapsulate cordyceps, it will last you for years.

Before I left America in 2016, I made 100s of cordyceps capsules out of two different strains.

The one strain was a light cream color, and the other has a darker brown color.

Two years later, I am still taking capsules from the same batch and feeling the effects.

These days, I barely take it though, only a few times a month.

A few months back, I did take it for several days straight and had one heck of a time.

In my opinion, cordyceps has a cumulative effect, which is another reason I love the stuff.

I take just three 00 capsules. Usually, I mix the two strains, so two capsules of one strain and one capsule of the other. Three 00 capsules equal roughly 1.5 – 2.25 grams.

I notice no difference in the effects between weights.

You may need more if you weigh more, but I don’t know for sure.

Like all supplements, it’s best to start with a low dosage and work your way up until you find the optimal dose for you.

Now that you know when I take cordyceps and the dosage I take, I’ll share with you the benefits I get from it.

Cordyceps Benefits and Side Effects

I first tried cordyceps back in 2012, then started taking it regularly in 2015 for about two years.

Over the past year, I’ve taken it less since my stash is dwindling.

As I mentioned, the positive effects are cumulative, meaning after a while you don’t need to take more to reap the benefits.

The one time I took too much of the dark brown variety before I encapsulated it, it did give me indigestion.

Another thing I noticed was that the higher dose didn’t produce any additional positive effects.

It actually didn’t work at all.

I found that the three 00 capsule dose is the magic number for me.

If you have the time and the room for it, it’s best to encapsulate your own.

I bought everything online.

The 00 capsules I use, I prefer using vegetable capsules over gelatin.

Here’s a list of manual capsule filling machines that will make you 100 capsules in minutes once you get the hang of it.

If you use that, you can make enough for an entire year in thirty minutes.

Since I’m a mad scientist, I also use nitrile gloves and a surgical mask while encapsulating.

It’s probably overkill, but the mad scientist in me likes to come out when it can.

What I like about one brand is the company guarantees no mycelium.

You want cordyceps that’s 100% mushrooms aka fruiting bodies. Since cordyceps is difficult to grow, most companies cheat by selling mycelium since it’s much easier to produce.

What happens is the mushrooms suck all the moisture and nutrients out of the mycelium to grow.

You don’t want to eat mycelium.

Now you know the best time to take cordyceps and what to look for when shopping for the best brand.

Cordyceps is one of my favorite libido boosters and Chinese herbs for male performance enhancement.

I prefer to use natural supplements that don’t make me crash or feel depressed afterward.

I’ve learned that once I find something that works, it’s best to stick with it.

Before now, I experimented with a bunch of different natural male enhancement supplements – some worked, some didn’t.

Now, I barely take any and feel great most days.

Cordyceps is a fascinating fungus that’s too unique to ignore.

Best of luck on your cordyceps journey and in the gym/bedroom!